What are you lookin' at?


School's back in session, so let's take a little quiz. Can you remember the difference between Zebra-tailed and Greater Earless lizards? Which one is this? (Answer in tomorrow's post.) (Don't ask Ned.)

Too late to pray, prey!

Clearly, this is a preying praying mantis. Sorry, bee.
For these and other great photos (including those from their recent trip to Madagascar and Costa Rica) spend some quality time at Bob's photography site.

Nothing sacred about this datura


This Sacred Datura (Datura wrightii) has grown across the path in the riparian area above the dam. This plant can cause an allergic reaction/general unpleasant itchiness if you touch it - and is poisonous to ingest - so don't walk through it (or smoke it)!

Two tails are better than one!


A Two-tailed Swallowtail, our state butterfly, nectaring from a Wheeler's Thistle (Cirsium wheeleri) on Mt. Lemmon. (But you can see these butterflies in Sabino Canyon, too.) If you're new to this blog or if you haven't looked in a while, check out Ned's flickr site for this and other flying machines.

Enter the riparian area above the dam at the steps near the restroom (that currently has a blocked drain outside). Just past the willows, look at the wall on your right. This old rain gauge was made visible in large part because of the removal of the giant reed. Check out this and other great photos at Angie's flickr site.

This dainty blossom is a Shrubby Purslane aka Copper Purslane (Portulaca suffrutescens), seen in the sand by the dam.

How to be a barrel cactus

This Arizona Barrel Cactus is standing tall and blooming bright.
That's today's lesson. Get out there and bloom! 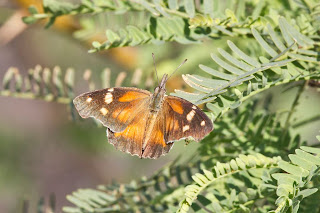 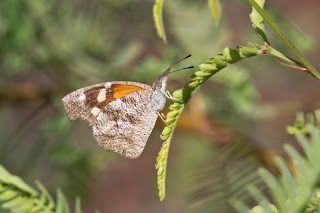 These are American Snouts. Click on the photos for a closer look. And head to Sabino Canyon for the closest look!

The ears have it!

And so does the rest of this Black-tailed Jackrabbit. Good camouflage, that is.
Posted by Sabino Canyon Blogger at 5:08 PM 0 comments

What kind of a rattler are you?

This rattlesnake was looking rather soggy and still on the morning after Thursday's big rain, and we weren't certain what kind it was. I thought it looked like it was getting ready to shed; I had a vague recollection of once seeing a gopher snake before it shed at a 'Reptile Ramble' at Tohono Chul. To get a real answer (rather than one just stated with confidence), I turned to Tom 'Snake Boy' McDonald, Docent Instructor at Tohono Chul. Tom wrote:
"First, the snake doesn't look like a diamondback. It looks more like a tiger rattlesnake. Unfortunately I can't see the tail, which might also help. Whether the snake is getting ready to shed is also difficult for me to say. Its colors seem muted, which might mean its scales are started to shed, but it could also be a natural color variation. I see tremendous variation in snake color, so it's difficult to know what the "normal" coloration is for a particular snake unless you've seen it a few times. Also, the eyes don't have the characteristic bluish hue that they often get right before the snake sheds, but then again that might just mean that the snake is still in the early stages of getting ready to shed and is not quite on the brink of doing so. So I guess I would say that it doesn't look like it's going to shed in the next couple of days, but beyond that I really don't know. Sorry I can't say anything more definitive."
Ned want back to the same spot in Sabino Canyon the next day and found no snake and no skin; so we'll go with cold and tired Tiger Rattlesnake. (Thanks, Tom.) If you haven't already been to a Reptile Ramble, I highly recommend it!

Two girls with twin hats taking advantage of the water slide at the dam. You rock, girls!
Posted by Sabino Canyon Blogger at 4:44 PM 1 comments

Text by Mark Hengesbaugh: "Like Buffelgrass, another ferocious invader, Giant Reed stalks burn very hot even when green. The rhizomes, or roots, are unaffected by the heat and stalks regrow quickly before any native plants can become reestablished. Luckily, when that campfire at the Sabino Dam got out of hand earlier this year, the Giant Reed stalks had already been cut or we may have lost every tree. Still, this Giant Reed is the first large plant to come back strongly after the fire."

That's right! These Red-spotted Toads were in action this morning at the dam bridge. Numerous pairs were spotted by numerous naturalists as they (the toads) came out to mate and lay eggs after yesterday's big rain. Really beautiful creatures. And the naturalists are all beautiful, too.

There's water over all the bridges and the dam, the creek is flowing! Let's hear it for yesterday's rain!

The power of fungus

Just what makes this little ol' fungus
think it can move a clod humongous?
(Maybe it was the ant's work. Click photo to see ant.)
Posted by Sabino Canyon Blogger at 12:07 PM 0 comments

A heart for vultures

Fellow nature enthusiasts (and herbivores) Gerry and Sue go the extra kilometer for feathered friends of all sorts. They've recently taken to moving 'road kill' to their yard so that they can photograph Turkey Vultures eating. That's some hard core soft hearted-ness.

Be sure to click on these photos for a larger view. Some amazing color variations in the wings. The Turkey Vulture above is doing some sunbathing.

Left and center are Black Vultures. They are more social than Turkey Vultures (and these two clearly know where to go for some good carcass) and flap their wings more frequently when flying. They are rarely this far north west. Take a look at the range map on the link above.

This post is in honor of Ned 'Raptor Man' Harris, to wish him a very happy birthday. Hope you have some good carcass....I mean cake.

Look in the nooks and crannies, look under other plants for these little beauties. Photo by Ned Harris.
Posted by Sabino Canyon Blogger at 8:12 AM 0 comments

Spider home (but no spider)

I won't post photos of spiders without advanced warning, but I can post this very cool looking Wolf Spider burrow.
(Arachnophobes, don't click on the link.)

A fine Desert Tortoise being viewed and NOT being touched, picked up, or otherwise man-handled, due, I'm certain, to the watchful eye of skilled naturalists on the scene. (See Jean Hengesbaugh in the yellow shirt and white hat.) Remember this for the road: Move the tram, not the tortoise. If you pick up a tortoise, s/he will 'void bladder', that is: pee all over you. This is not just messy for you, it's potentially LIFE THREATENING to the tortoise. They store water for dry periods in their bladder. If they don't have direct and relatively immediate access to more water to tank up, they'll die. As I'm sure you are aware, it's still pretty dry in the canyon now (what with no creek flow). Even if it weren't, though, DO NOT pick up a desert tortoise, however noble your intentions. If you need to stop the tram (or other vehicles), do so. The tram drivers actually like to point out critters to the tourists. They'll stop for you AND wait for the tortoise to cross the road.
Posted by Sabino Canyon Blogger at 4:26 PM 1 comments


Elizabeth sent in a question about creek flow that led me to the USGS database for Sabino Creek. (Warning! You could while away significant amounts of time playing with this data.) I ran a chart for Annual Peak Stream Flow, which is quite sobering.
Thanks, Elizabeth, for the great question.

The flowers are rather inconspicuous, but limber bushes are blooming in the canyon. Go take a look!
Posted by Sabino Canyon Blogger at 3:20 PM 0 comments

Another wildflower that blooms at this time of year. Desert Senna (Senna covesii)
Posted by Sabino Canyon Blogger at 10:10 AM 0 comments

Carol Tornow noticed this type of flower along the road across from the entrance to the Bluff Trail.  I could only remember 'pringle's' and 'vine', so I decided it was time for a review of Pringle's Clustervine.
Posted by Sabino Canyon Blogger at 12:11 PM 0 comments

Bob Wenrick managed to photograph this fast-moving, Ring-Necked Snake in the canyon on 8/1/11. Good to know these snakes are only 'mildly' venomous.
Posted by Sabino Canyon Blogger at 11:25 AM 0 comments

As experts predicted, the hard freeze in February was too much for some of the older saguaros. This one was rotting from the inside out, having been damaged by the frost. Peggy suspects that the two above the fallen one are also on their way down.
From this site:
"Because the saguaro is composed mainly of water, it is highly succeptible to damage caused by frost. Frost and freezing temperatures cause irreversible damage to the soft tissues of the saguaro. The damaged tissue rots and can weaken surrounding tissues, causing stems to shrivel or become wavy and arms to droop toward the ground. A prolonged freeze can permanently damage the growth cells at the tip. If the saguaro is able to recover, new arm buds can grow out of the damaged tip, but the connection between the two is not continuous and appears like a sausage link. Irreversible frost damage and death occurs when the saguaro is no longer able to protect healthy tissue from the bacteria decomposing the rotten, frost-damaged tissue. The decomposition spreads into the healthy tissue and destroys it, turning the rotten tissue into a black gelatinous mess that oozes out and runs down the exterior of the cactus. Saguaros can live from a few months to 9 years after the fatally damaging frost (Steenbergh and Lowe: 1983)."
Posted by Sabino Canyon Blogger at 8:54 AM 0 comments

That was some good elephant!

Ned Harris 'caught' this guy on the rear patio of the visitor center on Sunday morning. If your elephant has gone missing, well....
Posted by Sabino Canyon Blogger at 6:12 AM 0 comments