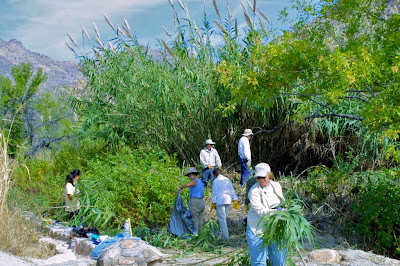 The north side of Sabino’s was infested with dense thickets of 25-foot tall Arundo donax (Giant Reed). On November 2, 2008, volunteers began to cut it down, dig it out and haul it away. 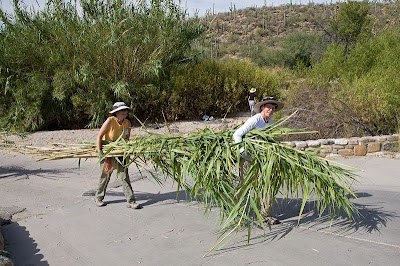 The total Sabino Arundo removal effort included 6,000 volunteer hours. More than 40 species of plants have been observed returning to places that once grew only Arundo.

On the once-Arundo donax-infested mound on the north side of Bear Bridge, you'll now see (among other natives) Mexican Vervain Glandularia bipinnatifida. (Yes, that's a dead stalk of giant reed in the center of the photo.) Go take a look. And marvel at the courage and vision of Jean and Mark Hengesbaugh for taking on the coordination of this eradication project.