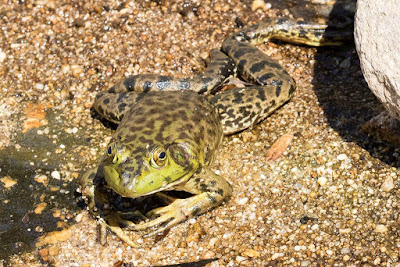 The bullfrog is native to the eastern United States. The date of first introduction to Arizona is unknown, but they were introduced to California in the 1890s, and by the late 1920s the species was reportedly common on the Colorado River at Yuma. Bullfrogs are awesome and voracious predators. Predation by bullfrogs has contributed to the decline and extirpations of native leopard frogs and gartersnakes. They are one of the biggest challenges to the recovery of the Mexican gartersnake and threatened Chiricahua leopard frog. Elimination of bullfrog populations is achievable in small, manageable wetlands, but is difficult or impossible in lakes, rivers, agriculture, and other complex habitats. Bullfrogs are also a vector for chytridiomycosis, a fungal disease that is killing frogs and toads around the globe. By Jim Rorabaugh 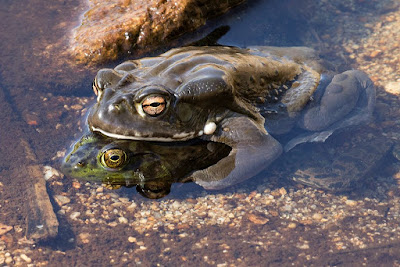 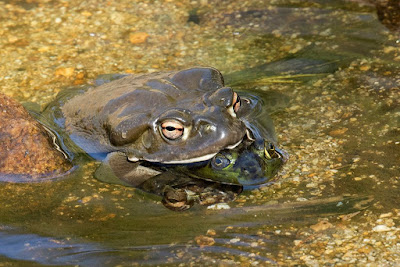 In terms of reproduction, these pairings aren't going to be successful (as these are different species). We might want to find out how big of a problem the American Bullfrogs are in Sabino Creek. Any experts out there?