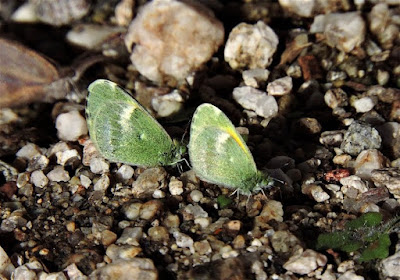 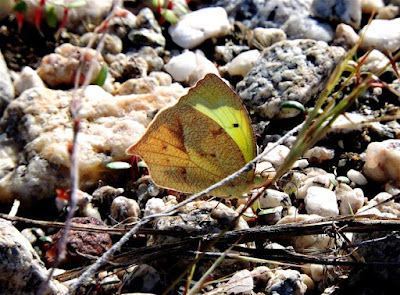 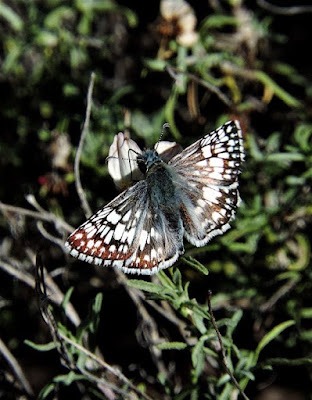 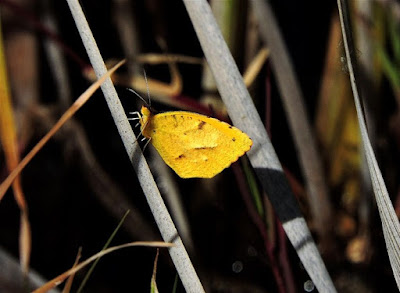 Bonus from Fred Heath in answer to this question. Fred writes:

The Mallow Scrub-Hairstreak is one of many fairly large hairstreaks of the genus Strymon which are mainly found in somewhat open areas, thus the “scrub” designation. All of the known host plants for the Mallow Scrub-Hairstreak (Strymon istapa) are in the Mallow Family. Although this normally rare butterfly in SE AZ has been regular in Sabino and throughout the region since late fall, we have not yet found which mallow host plant it uses in Sabino. This was one of the butterflies that could be found easily nectaring on the Euryops multifidus earlier this year.
Many of the crescents including the Texan have a small crescent shaped pale mark in the middle of the margin of the hindwing on the underside. This butterfly was most likely originally described from Texas, thus the Texan name. The name is an oddity, as all of the other butterflies in the U.S. named for a state use the state name directly (Arizona Hairstreak, California Crescent, West Virginia White, etc) and not as a resident of that state. There is no Arizonan butterfly, for example.
Metalmarks are a group of mostly tropical butterflies, a few of which (including the some on the East Coast where the family was named) have some markings which, in the right light, look metallic (not shown in Marty’s picture). When folks ask me why the butterfly is called Fatal, I usually tell the following story: The scientific name of the butterfly is Calephelis nemesis and the first collector who saw this butterfly could never catch it and it became his nemesis. One day he saw one nectaring on wildflower just over the edge of a steep cliff and in his haste to catch it lost his balance and plunged to his death. Thus it was “fatal” to him. Except for the scientific name, which is correct, the rest of the story is not true. Actually many butterflies were named after Greek gods and goddesses and Nemesis was the goddess of retribution and vengeance. So because she could determine one’s fate, the English name became Fatal.