Phil Bentley sent in these great photos of a Sonoran Desert Tortoise (8/17/2016)! What a beauty! 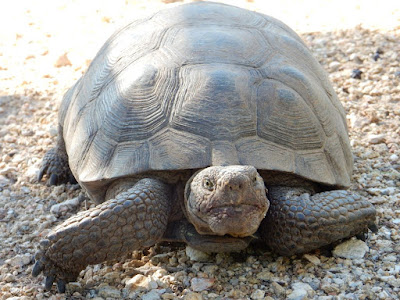 Notes copyright Thomas C. Brennan, from the website Reptiles and Amphibians of Arizona.


BEHAVIOR: Primarily diurnal and crepuscular but occasionally active into the night. The Sonoran Desert Tortoise is entirely terrestrial. It shelters and hibernates in self constructed burrows that are often excavated under large rocks. It uses its strong, paddle-like forelimbs to dig. Also shelters in naturally occurring cavities under rocks or in the banks of washes. When threatened it pulls the body and head into the shell and covers the opening with its thick, armored forelimbs.


REPRODUCTION: This tortoise mates from June through early August and lays a single clutch of up to 12 eggs the following June or July [emphasis Anne's]. The eggs are usually buried inside the burrow.


PROTECTED throughout Arizona
It is against Arizona State law to harass, harm, pursue, hunt, shoot, wound, kill, trap, capture, or collect this animal in any part of the state. It is also illegal to attempt to engage in any such conduct.


I've blogged about this before, but it bears repeating: Sonoran Desert Tortoises retain water needed for survival in their bladder. They'll pee if picked up or otherwise harassed. Unless they can tank up immediately (unlikely most of the time), they'll die. Continue to educate others about this!