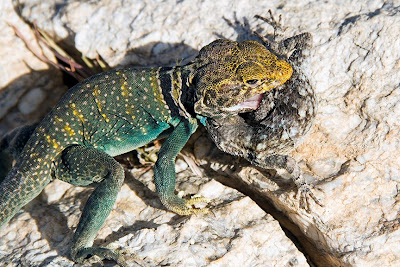 You'll want to click on these photos for larger views.
Wayne sent in these shots (taken on the Blackett's Ridge trail) of a male Eastern Collared Lizard sinking his teeth into a Clark's Spiny Lizard. Not only are Eastern Collard Lizards territorial, they won't hesitate to eat lizard 'cousins.' The Clark's Spiny is fighting back, though, as you can see best in the 2nd shot.
According to the link above and other sources, Eastern Collared Lizards will, like their extinct 'cousin' the T-Rex, run on their hind legs only. Let's try to get photographic evidence of this from Sabino Canyon, shall we?