I was planning on saving these ghoulish critters for a halloween post, but I couldn't hold out any longer! Hold on to your breakfast and read on!

[A]t a meeting of the Native Plant Society, one of the folks came up to me and described some bugs (non-scientific definition) that got all over his clothing after bushwhacking in Ironwood NM. He said they almost looked like tiny scorpions with their tails held up in the air. I asked if he had a photo and the answer was no. Since I had no idea what he was talking about, I figured to just let it go.
On Thursday morning [9/10/2015], I was walking around Sabino checking out Canyon Ragweed (Ambrosia ambrosioides) which I just recently found out was a host plant for Bordered Patch, when I found a well-eaten plant and checked it for the patches. To my surprise, what did I find, but little scorpion-like insects (at least they seem to have 6 legs), the like of which I’ve never seen. I’m thinking they might be some sort of beetle larvae, but I really don’t have the foggiest idea.
I did, however, take a few photos. They are clearly eating the ragweed. Can you help clear up this mystery and tell me what the heck they are? 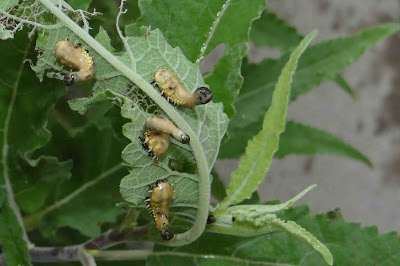 The insects in the images are larvae of the Arizona Tortoise Beetle (Physonota arizonae), or a very close relative. They wave their poop around on the end of the abdomen, presumably to deter predators.