There's a new-ish fish in town!

Today (5/10/2017) while searching for dragonflies and garter snakes from the Bear Bridge. I noticed some fish which were more guppy-shaped than our regular Gila Chub. As I was trying to figure out if it was just my imagination, a much smaller black fish came into view chasing my guppy-shaped fish. Having recently read an Arizona Game and Fish brochure on Gila Topminnows and Desert Pupfish, I knew I had found some of the Gila Topminnows which had been recently introduced into Sabino Creek (I believe up near Tram Stop #8….I will check with Josh). Like the guppies, the female topminnows are live bearing and so the females get quite large around the middle.

Unfortunately, the photos taken with my point and shoot camera are not the best quality and hopefully someone like Marty or Bill can get some better photos.[Anne notes: Marty's are tomorrow's post.]  However, they are good enough to ID the fish. 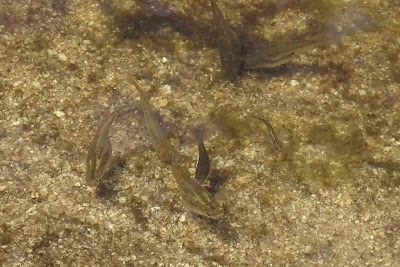 The first photo shows a male (in his black breeding coloration) trying to accost a female. Along with the many females and a handful of very busy males, there were several young fish that I believe were also topminnows (see to the right and slightly above the male). 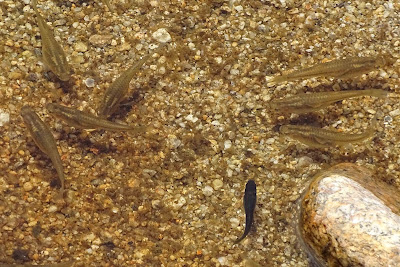 The second photo shows another male eyeing a bunch of females just below the Dam Bridge. Note that sadly the fish in these two spots are in tiny ponds which probably won’t last until the Monsoon rains. 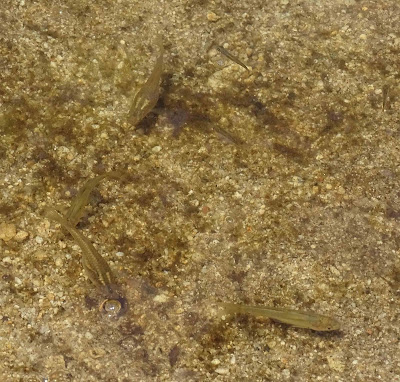 In both places there were also Gila Chub and third photo has a small chub in the bottom right. They are generally longer and sleeker than the topminnows and its tail is forked where the topminnows have fan-like tails.

Stay tuned for more on this fish story!