Get your collar on! 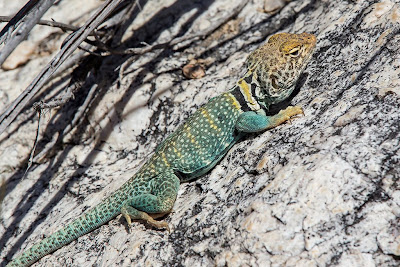 The top is actually a subadult male [Eastern Collared Lizard], as it has the pattern intermediate between a juvie and adult (they start out reticulated, then become spotted…apparent on the rump), plus the orange bars are a ploy by subadult males (and juveniles) to mimic gravid females so that the adult males don’t attack them. The bottom is an adult male. You can see the male in the second foto has a much larger head that the subadult (or female) and more developed color pattern. Nice shots, by the way!

Anne 'Notaman' Green says: Thank you for your support of this blog!