This a a normal stalk with flowers. Desert Spoon is dioecious (i.e., separate male and female plants). I can't tell if these are male or female flowers (I'd say male, if pressed), but it's a nice stalk, in either case. Take a look at page 178 in Rose for more info and photos. Unlike the Golden-flowered (Agave chrysantha aka Century Plant) and Parry (A. parryi) agaves, the Desert Spoon doesn't die after flowering. 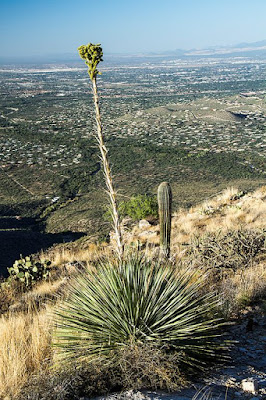 Wayne saw the stalk above and took a closer look. 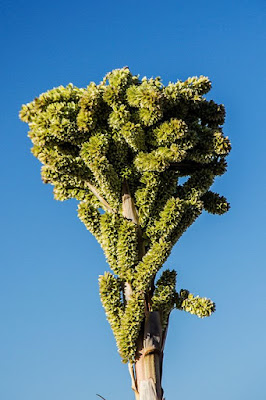 Looks a bit gnarly, to me. Many plants can form crests, as we've seen; this may be another example. It may be that the stalk is still growing, or it may have been chopped or broken off somehow. If you have another theory, let me know. (I'd say female flowers, on this one. Corrections welcome!)