Photos and Texts by Mark Hengesbaugh 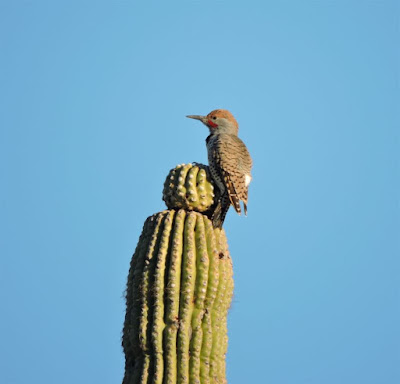 This Gilded Flicker, photographed near the road to Bear Canyon Bridge in Sept., is member of a species at risk of extinction according to The North American Bird Conservation Initiative (stateofthebirds.org). According to the organization’s recently published survey and analysis, fully one-third of North America’s bird species are at risk—432 of 1,154 species. The solution? Conserving vital bird habitat strongholds such as Sabino Canyon.

The Gilded Flicker is one of two species of woodpeckers that excavate holes in saguaros in Sabino. Those openings eventually become high-rise condos for other nesting birds like Purple Martins. Gilded Flickers are year-round residents and eat mostly ants, but also beetles, termites, caterpillars along with fruits, berries, seeds and nuts.

Once Cooper’s Hawks are fledged in spring from that highly productive nest above Sabino Dam, where do all those young hawks go? Well, maybe some of them stick around. We saw this fearsome first-year hawk at the dam, Oct. 6. You can tell it is a first-year hawk because it has yellow rather than red eyes and a streaked breast rather than a roufous chest.


Thanks, Mark, for your words on these birds!