Going for the gold in snake eating

Don't be deceived by the heart-shaped pose of the Gophersnake. S/he's in serious trouble from the Kingsnake. Neither is venomous, but both can wrap and hold tight. The Kingsnake has all the moves! The head is pointing downward; you can see one eye 'dead' center of this photo. 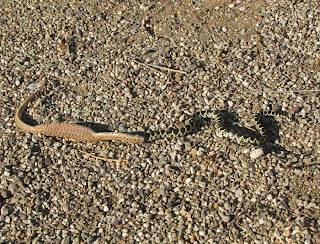 The Gophersnake had recently eaten what appeared to be another Sonoran Desert Elephant (but was actually a rather imposing looking pack rat. I'll spare you the photo evidence of that here. Look on Bob's website). That's probably why s/he lost this round. But the Kingsnake didn't finish this meal. S/he backed out of the Gophersnake after reaching the rat-impasse. (See Bob's site for more. If you dare.)
Posted by Sabino Canyon Blogger at 7:16 AM