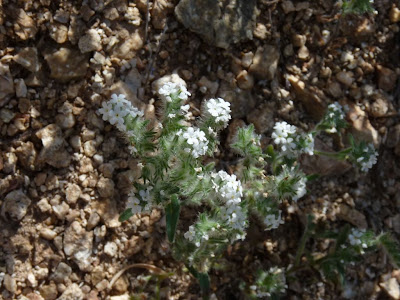 These plants in the Borage Family (Boraginaceae) are reliable early-spring bloomers. Foliage abounds, and some tiny flowers have been sighted. Experts can tell the difference between the plants that have tiny white flowers by looking at the fruits. Since we have to wait on those, we can say that the whites pictured here are some species of Cryptantha. (Cryptantha = cryptic or hidden flower)
The orange-yellow in the canyon are usually Amsinckia menziesii var. intermedia (Fiddleneck); but Amsinckia will do fine! (Named after 19th-century plant enthusiast Wilhelm Amsinck, who ponied up the money for a garden in Hamburg, Germany.)
The purple-blue flowers are some species of Phacelia, probably Phacelia distans (Wild Heliotrope).
Look low and look often.