We found two elf owls this morning (July 11, 2016) along Sabino Creek, alerted by racket from a half-dozen tiny birds hopping around in a palo verde. The Elf Owl with the charcoal chest and mostly closed eyes may be a juvenile, the other is an adult. Mobbing is when birds join together to drive out a predator. If you listen and watch for birds of several species in one location making fast, insistent chips, a predator is probably the object of their attention. This mob was comprised of Black-tailed Gnatcatchers, Verdins, a Lucy’s Warbler, and a female Broad-billed Hummingbird. Mobbing deprives an avian predator of the element of surprise, at the least, and s/he also may get poked from behind by an agitated little mobster. 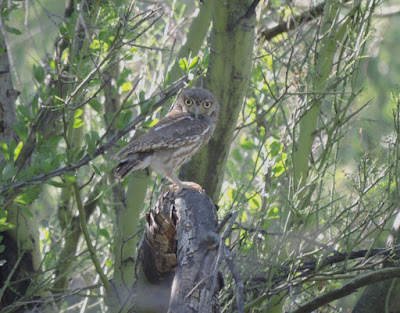