You provided material for a great Anne Green story today! After you found the Western Diamondback [on the plant walk of 4/21/2015], you said, as you were heading out: "I'll go and cue a Gila Monster now."
We got everybody in the group to see the rattlesnake, and then Jerry (using a long pole) managed to chase the snake far enough off the path so no passers-by would get an unpleasant surprise on their ankles. For what it's worth, the snake wasn't happy, but never once rattled.
After we got the group together, we proceeded down the trail that the snake had been blocking. In less than a minute, a Gila Monster was seen! [The photo above is] proof of your magical powers. 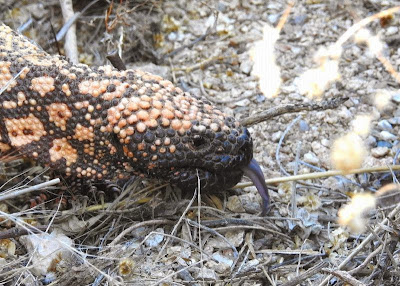 A few weeks later, some members of the SCVN class of 2007 joined Alexa (who was in town again from Germany) on a nature walk. As I was pontificating on a plant, I turned my head and saw - you guessed it - a Gila Monster! If we had our Gila Monster pattern scanner, we could tell if this is the same individual from the sighting above. (S/he was in the same area.) I like to think that I called up another one : - )